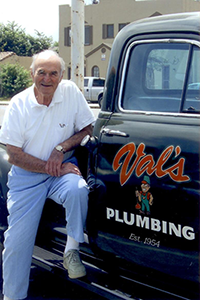 Valerio Roberti, our founder, was born in San Vito, Lucca, Italy. He came to America with his mother and father at the age of three. He moved to Portland Oregon, where he lived for eight years, then the family moved to Gilroy, California, where Val grew up.

Val served two years in the Army during World War II. After he was discharged, he returned to work for an Italian prune farmer. In 1947 his uncle, who lived in Castroville, spoke with Val and convinced him to become a plumber. The plans was that he would work for him at his place of business, with a promise of becoming a partner. Val worked for his uncle for 6½ years, from 1947 to 1953. The partnership promise did not materialize and his uncle was considering retirement.  At that time, Val decided to take a chance by starting his own plumbing business.

So, In February of 1954, behind a blacksmith shop in Castroville, Val started a new business called Val’s Plumbing. One year later, Val’s brother joined him at the new company. As Val’s Plumbing grew larger and more successful, in 1968 he purchased property on Front Street in Salinas, California, and constructed a new building.  He then added the heating, air conditioning, and sheet metal division to the business to better serve his customers. In 1968 Val’s Plumbing became Val’s Plumbing & Heating, and growth continued.  Val Roberti retired in 1983 and enjoyed a wonderful retirement for many years.  In 2007, Val Roberti passed away, leaving the company in good hands to continue serving our community.  Currently, Val’s is actively managed and operated by partners of the firm, and the business continues on an upward trajectory.

Claude Bastianelli is a partner, and the President of Val’s Plumbing & Heating, Inc.  He has over 30 years of HVAC, plumbing, and sheet metal industry experience. Claude started at Val’s in 2003 as the service manager, building and refining the service department for the company. Then, in 2007 he became an estimator and started pricing large construction projects. Claude then became the CFO for Val’s in 2011, eventually took on day-to-day operations and business management, and then became president of the corporation in 2016.

Dale Self, also a partner here at Val’s, has over 30 years of experience in the mechanical HVAC industry.  Dale has been with Val’s since 1993, and is currently the general construction operations manager for Val’s and actively manages the day-to-day operations of our HVAC & sheet metal department. Dale estimates small to medium sized construction projects and prides himself on doing the right thing all the time, being efficient, and delivering a quality experience to all of our customers.

Delia Morales has been with Val’s since 1983.  She is also a current partner, and is our office manager. Delia makes sure that the paperwork gets done. She has worked her way up in this company from a retail sales clerk, through A/R, A/P, H/R, payroll, bookkeeper, labor compliance, and now has been our office manager for years. She takes pride in everything she does, and does her job extremely well.

Jose Casillas is our plumbing estimator, and a great part of Val’s Plumbing & Heating, Inc.  Jose estimates large plumbing, hydronic, medical gas projects, and has worked here at Val’s for over 15 years.  He has over 25 years of construction industry experience, and is a great person to work with.

Other key employees here at Val’s are Raymond Gomes, who is responsible for managing our plumbing & hydronic department, and David Kidd, who is our service manager.  Raymond and David each have over 30 years of industry experience in plumbing and mechanical construction, and have worked at Val’s for much of their entire careers.